I am thankful for those of my ETA friends who consistently put up with my slow learning. Each time we are out, they correct my lacking Korean pronunciation. And, as a bonus, they sometimes give me an insight into what is going on around me.

Such was the case at church today when I went with Esther, Victoria, and Kirim. We attended the Methodist church, which has a large cross on top of it which lights up neon red at night.

When driving on the interstate, it is always perilous to be my passenger if we pass a church. I will turn my head to try to see what sort of church it is. Then I will become distracted trying to glean clues from its symbols and architecture so I can tell you about its tradition’s origins and splits and controversies and distinctives: because I’m a ecclesiastical nerd.

Which is to say, I may drive the car into a ditch, but you will be highly informed on why the Independent Christian Churches and Disciples of Christ split and how they are both related to a Kentucky revival in 1801.

This is not to say I am the “holiest nerd,” because ecclesiology (church governance, ecclesiastical polity) is the most dirty and political branch of theology.

Ecclesiologists are like the surgeons of Christianity: they slice, take samples for analysis, stitch up, and put their hands on the prone-to-infection parts of church life no one really wants to touch, polity: how decisions are made.

If you see an ecclesiologist interested in what is happening in your church, just like if there is a surgeon interested in your body, either blood has been spilled– or it is going to be.

Fortunately for you, I won’t be discussing ecclesiology here, but observations about worship (liturgy).

What I noticed about the Geosan Methodist Church:

-Welcome, nice to meet you! No need to donate! The church, despite language barriers, welcomed us warmly with lots of bowing, shaking of hands, and greetings of 반갑습니다 (bangapsumnida: nice to meet you). Kirim encouraged us to put some won (₩) into a box when we entered (this is how the church collected offerings). However, a woman quickly pushed me to my seat as I took out my wallet. Apparently, she did not want a guest to give! Or, maybe, I was just in the way!

-Pastors need strong legs. In both churches I have attended in Korea (one Methodist, one Presbyterian), this has proved true. He did not sit in a chair or a pew the whole service. Meanwhile, the congregation sang more than half of the songs sitting down.

-Pastors need good singing voices. Two churches in one city is a negligible sample size, but in both cases the Pastor led singing. The Methodist church had two women who sang, but only one of them ever stood up. Most songs were sung sitting down. They had microphones in front of them at the pew. This reminds me of the Anglo-Catholic parish, St. Giles, I attended in Oxford. Chanting was a big part of the Pastor’s job. I hear many traditions require seminarians to take voice lessons. I am sure many Baptist pastors in America are happy they do not have such a requirement. There was a choir in robes singing as well, but they were to the side of the congregation. The Pastor was very much in front and in front of a microphone.

-Call and response: wake up your neighbor and tell them what the preacher just said. Reading allowed, in unison was common. There were lots of “Amens” in the sermon (which, is pronounced more or less the same way as in English). And the Pastor at least half a dozen times told the congregants to say something like “God meets you in prayer” to one another. During the sermon, people would turn as directed and respond to one another.

In some ways, churches in Korea are very traditional. The Pastor wears robes. There was the prayer of confession (which I appreciated, though I could not understand it) served at communion. The songs are hymns–(including “Jesus loves me” in Korean. How nice it was to recognize a song!), but there is also some expressiveness to worship. Those in front of me rocked back and forth during songs, and there was some clapping. While hardly your heavily charismatic experience, congregational participation was, happily, very present.

-(American) Patriotism? Or an example of faithful prayer? Today’s passage was Luke 18:1-8. It concerns faithfulness in prayer and gives a parable of an unjust judge who, nevertheless, exacts justice because a woman bugs him so much. To quote Eugene Peterson’s paraphrase (or Protestant mid-rash, as one Orthodox internet friend put it), Jesus’ point is to say:

“Do you hear what that judge, corrupt as he is, is saying? So what makes you think God won’t step in and work justice for his chosen people, who continue to cry out for help? Won’t he stick up for them? I assure you, he will. He will not drag his feet. But how much of that kind of persistent faith will the Son of Man find on the earth when he returns?”

Prayer is important, and it is efficacious. That was the point of the sermon. Yet, it began in a way I did not expect: a video of soldiers, The 101 Airborne with Mohawks, the landing at D-Day, and President Eisenhower. Victoria told me one of the phrases in Korean on the video was “Eisenhower: a man of prayer.”

Relating something like Patriotism in any way which makes it seem synonymous to devotion to God is something that never exactly makes me comfortable in church. Though, I must say, I was doubly surprised to see an American President (perhaps?) held up as an example of Christian devotion. I always have admired Eisenhower (and his predecessor, Harry Truman) as some of the best Presidents of the 20th century. And as the video was shown, I remembered that Eisenhower was the only President in U.S. history to be baptized while President. Yet, I confess, I have no idea what the point of the video exactly was!

Somethings just remain uncertain. And while I love analyzing churches, one of the good things about not understanding everything which happens, about being an outsider in a different culture, is I am less critical. I simply observe and participate in ways I can, and worship. While I believe in worshiping in the vernacular (language of the people), participating as a guest is a humbling experience for my critical mind.

The sermon itself did not seem to mention Eisenhower or any other political figures (from what was told to me). Rather it focused on the devotion of prayer of biblical figures.

-No hymnals, no Bibles in the pew. bring your own.

Conveniently, both Korean churches I attended had ledges on the pew to lay a Bible flat or put a communion cup. There were no hymnals or bibles provided. Rather, the words (AND musical notes) were displayed on screen. Kirim asked the three of the Americans who attended with him, “Why do you not bring Bibles? It’s worship!”

I did notice most people brought Bibles. The kinds which zip or snap in protective cases are the most popular. And, apparently, among some it is very expected you bring your own (though scripture was also projected on the screen).

-Excuse me while I change.

Communion was served during service. Three men and one woman went up to the alter and received communion directly from the Pastor before distributing the elements to us in the congregation. One of them was the man in front of me. Just before, he steps out in into the aisle, and starts putting on a white robe over his clothes. They also wore white gloves with a red cross on the back of the hand. This was different than what I am used to seeing. But the sudden clothing addition seemed routine for him.

Communion was served with real wine: which surprised me a little. I by no means object to the practice. However, real wine is uncommon (though no longer banned) for Methodists in the United States. Victoria told me it was a dessert wine. It was quite good, I have to admit. Though it felt strange to think that about the blood of Christ (in whatever sense you believe, or don’t believe it is). I almost prefer “the blood of salvation, spilt for you” to be something slightly unpleasant.

-Come eat after the service!

The meal, minus the watermelon, served after church. 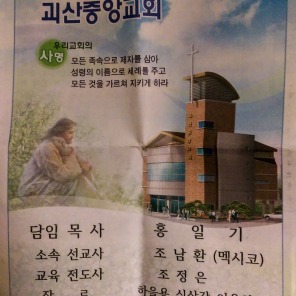 The bulletin from the church.

The dining building at the Methodist church.

A full meal was served after the service. I was given extra dried seaweed, because many Koreans seem to imagine I can not handle the spicy food. Alas, I am picky–but I can handle spicy food. In fact, I ate many of the green peppers just fine. And there was watermelon: I know I will be very upset when it is no longer in season. I think I love it almost as many Korean people do!

Also, at lunch, just like at a restaurant I ate at yesterday, I was told to use a spoon after paining a Korean at the same table with my abysmal use of chopsticks. Such is life, when you are the only white person at church! Sometimes, you get a little extra attention. Such is life.

I loved attending church and always love observing how fellow believers in different cultures gather for worship. I am not often an outsider, and not often is Christian worship foreign to me. Visiting a new place, a new culture, allows me to experience worship, somewhat, with new eyes and renews the simple joy of spiritual communion with believers and worship of God. There is more to analyze, because there is more I do not know. Yet, the distance also encourages simple participation. Sometimes I am just happy to recognize the tune to “Jesus loves me.”

Definitely, I look forward to visiting more churches and learning more about Christianity in Korea.

Oh, and we stopped for Patbingsu 팥빙수 (a shaved iced dessert) at a coffee shop!

Left to right: Victoria, Esther, me, and Kirim.

Spent today reading this new book.
Eat ur heart out in-n-out.
The best volume of the Church Dogmatics.
Not a bad place for sermon preparation.
Amazing Korean food with Abhik!
First Sunday in the books!
Loading Comments...
Comment
×
%d bloggers like this: